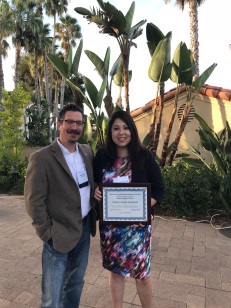 The Irene Ledesma Prize is awarded to a Ph.D. graduate student and is intended to support research in western women’s and gender history. The Prize is named in honor of Dr. Ledesma’s important contributions to the fields of Chicana and working-class history until her untimely death in 1997. That same year Ledesma received the annual CWWH Jensen-Miller Prize for her article “Texas Newspapers and Chicana Women’s Activism: 1919-1974” in the Western Historical Quarterly (26:3). See a list of previous award recipients here: Irene Ledesma Prize Recipients, 1990-Present.

Prize Call
The $1,000 Prize supports travel to collections or other research expenses related to the histories of women and gender in the North American West. Applicants must be enrolled in a Ph.D. program at the time of application. The Coalition will award the Prize at the CWWH Breakfast during the Western History Association Annual Conference 2019 in Las Vegas, Nevada. The recipient will also be awarded a one-year complimentary membership in the CWWH.

Application Procedure:
To apply, submit one copy of each of the following (as a single PDF file) to each member of the committee:

1. Cover sheet with your name, contact information, project tile, name of reference
2. Curriculum Vitae
3. A brief description of the research project and an explanation of how the prize funds would support the research (not exceeding three double-spaced pages, addressing the above criteria).
4. A line-item budget
5. Letter of support from the student’s dissertation advisor 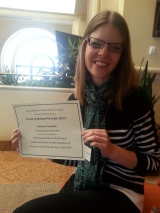 Brianna Theobald, recipient of the 2013 Irene Ledesma Prize, was a Ph.D. Candidate in History at Arizona State University; she is now the Chancellor’s Postdoctoral Fellow in American Indian Studies at the University of Illinois Urbana-Champagne. 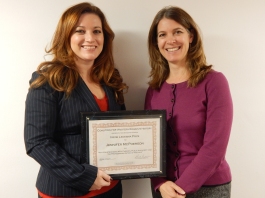 2015 Irene Ledesma Prize recipient Meggan Bilotte (on right) with Prize Committee Chair Sarah Janda at the 2015 CWWH Breakfast in Portland. Bilotte is a Ph.D. Candidate in History at the University of Wisconsin-Madison.

2016 Irene Ledesma Prize recipient Margaret Neubauer (on right) with Prize Committee Chair Katrina Jagodinsky at the 2016 CWWH Breakfast in St. Paul. Neubauer, who also holds a J.D., is a Ph.D. Candidate at Southern Methodist University where she is writing a dissertation titled “American Indian Child Welfare, Activism, and Sovereignty in the Twentieth Century.”